What Colour is Your City?

Only the very colour blind visitor could have failed to notice the preponderance of pink that currently adorns Belfast city centre. It’s on walls, civic buildings, private residences, hotels, buses, taxis, billboards and shop windows and is all part of the build up to the Giro d’Italia cycle race. Although not as famous as its cousin the Tour de France it is one of Europe’s ‘Grand Tours’ and an Italian institution. Remarkably the first couple of days of the race will be in Ireland this year, beginning with Belfast (perhaps not so remarkably as the Tour de France is visiting Yorkshire this summer).
The leader’s jersey in the Giro is pink and so the colour has been adopted as the colour of the race. Although I did wonder at first if it was something to do with breast cancer awareness as branding goes it is pretty good.

It got me thinking about branding colours and cities and why no city to my knowledge has tried to ‘own’ a colour.

On a recent visit to Barcelona the colours of the city’s better-known football team are very visible, but I’m not sure the city fathers have co-opted them totally. Certainly the association of the scarlet and blue stripes with both the club and the city is quite strong. I don’t think that could work everywhere though, good luck using that technique for Glasgow for example.

Ironically Glaswegians of my vintage and older will remember when the city’s buses were green and yellow and then later orange. London’s red buses are iconic, supplemented by old red telephone boxes too. New York’s yellow taxis also spring to mind but neither city has officially adopted either colour as far as I know. Perhaps Aberdeen as the ‘granite city’ is way ahead of me on this, but I’m not sure grey is the colour I’d choose to brand my home town.

Branding a city with a specific colour shouldn’t be that difficult. Properly marketed it could be quite effective, brands do it all the time after all. Belfast will remain pink until this weekend at least, then I guess the pink will return to Italy along with professional cycling, that most colourful of sports. Shame, it really lifts the place. 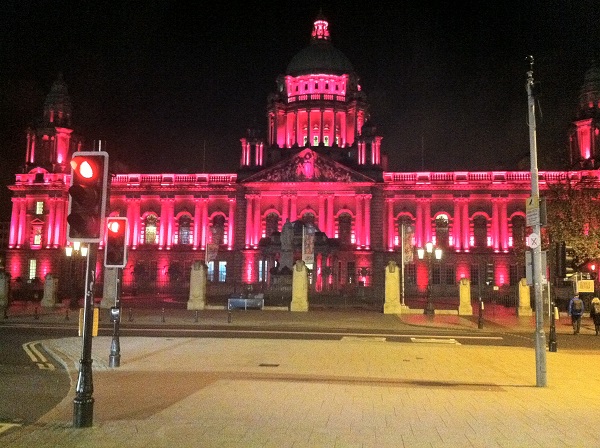