Why I Love Drupal

s of people and is available in around 200 languages. Although there are many reasons we use Drupal, we’ve put together a list of, in our opinion, the main ones.

Easy to install
Drupal is platform independent, meaning that it doesn’t matter what operating system your webserver uses, whether it be Windows, Linux/Unix or Mac OS. All Drupal needs to run are PHP and a database. It also has a database abstraction layer, meaning that it can be run on different database platforms. Although the most commonly and easiest to use is MySQL, Drupal can also run on PostgreSQL and others.

Themes
Customisation of the look and feel of your CMS is very important, so it has to be fairly easy to do. Drupal has an excellent and very flexible theming system that allows you to customise how your website looks. Drupal also has around 1000 user contributed themes that you can download, install and start using straight away. Some of the themes, such as the brilliant Zen theme, are simply “base themes” that provide a basic framework to allow rapid development of a custom theme.

Modules
One of the best things about Drupal is that it is a “modular” CMS, which means that add-ons can be written for the system to modify or add new functionality. These are known as “modules” in the Drupal world. Currently, there are around 10,000 Drupal modules available to download from the Drupal website that do everything from resizing images, to quickly making contact forms.

Developer API
As a follow up to the previous point, the reason that Drupal has so many excellent modules is because it has a fantastically in-depth API. This means that if you are a developer and you need a piece of functionality from Drupal that is missing from Drupal core and the user contributed modules, you can make it happen yourself. The Drupal API also has a massive amount of documentation and examples to help would-be module contributors.

Widely Adopted
Although this isn’t a foolproof reason to use Drupal, as even bad software is used widely at times, it is a good indicator of what I would call “safety of (software) adoption”, whereby the risk of using a piece of software is reduced by the fact that it is unlikely to be unsupported in the near future. The Drupal community is thousands strong and it seems that every day more high profile organisations are adopting the system in place of expensive enterprise solutions. Websites such as The Whitehouse, MTV, The Economist and World Food Programme all run on Drupal and it is examples like these that encourage adoption. 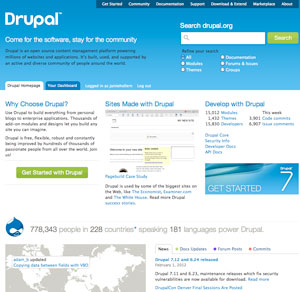